This Cuban-style grilled salmon is first marinated in a mixture of garlic, shallots, lemon juice, cumin, and cayenne pepper and then grilled to achieve the maximum flavor, but it can easily be pan-fried or baked in the oven and it will still taste amazing.

The first thing I associate with Cuba is not their salmon recipe but their cigars. And I associate their cigars with our late president Josip Broz Tito. Back in a day, you could often see him with Havana's “forbidden fruit” between his fingers.

He smoked Cuban cigars, cigarettes using a holder, and tobacco pipes. It was his trademark and it was socially acceptable.

But Tito wasn't known for his smoking. He was our beloved president and the chief leader of the Non-Aligned Movement, alongside Jawaharlal Nehru of India (on whom I had a crush, but that's a story for another day), Gamal Abdel Nasser of Egypt, Sukarno of Indonesia, and Nkrumah of Ghana.

How much Tito was respected in the world, testify many recordings from his visits to countries across the globe. However, one of the anecdotes that speak a lot about this respect was created by the administration in the White House, during his visit in 1971.

In the White House, smoking was strictly forbidden, and no one thought of lighting a cigarette there. Also, at that time, the intolerance of the regime in Washington towards Cuba's Fidel Castro was at its height.

Knowing all this, Tito, during the meeting with Nixon, in front of journalists and photo reporters took out a cigar and started smoking. And it wasn't just any cigar. It was Cuban, given to him personally by Fidel.

"Mr. President, we do not smoke here in the White House," said astonished Nixon. Tito looked at him, continued to smoke, laughed and said: "Good for you!" They finished the meeting without Nixon mentioning this ban again.

Not sure if the story checks out but Tito was not an arrogant leader. Life was good and we miss him. From 1943 to his death in 1980, he held the rank of Marshal of Yugoslavia, serving as the supreme commander of the Yugoslav military, the Yugoslav People's Army (JNA).

With a highly favorable reputation abroad in both Cold War blocs, he received some 98 foreign decorations, including the Legion of Honor and the Order of the Bath. When he passed away, our country started falling apart and a decade later we fled the war zone.

Forgive me for going on about Tito when you're here for this marinated grilled fish recipe. But food is an incredible stimulus. Although I've never had any Cuban food before (however, I did buy Cuban cigars as a gift), this dish unexpectedly triggered memories of care-free young life in my homeland. And just like this dish, the life there was colorful and delightful.

I recommend serving this grilled salmon with fresh mixed salad greens and tomatoes for a light lunch or supper. It pairs great with djuvec rice from my homeland. It's a delicious and healthy way to honor Tito. It beats smoking a cigar.

You can also cut the salmon into portions prior to grilling. 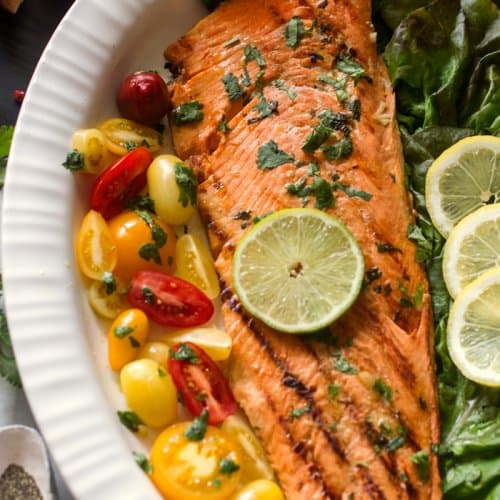 ~ Free Tip ~ You can also cut the salmon into portions prior to grilling.