Have your cake and eat it too! This flourless and moist cheesecake made with Corsican cheese brocciu (or ricotta), eggs, and lemon zest is a traditional cake of this lovely Mediterranean island.

You can easily turn this naturally gluten-free and low in carbs cake into a complete guilt-free dessert by replacing refined sugar with a sugar substitute. Throughout history, Corsica has been tossed around like a ping-pong ball and was continuously occupied since the Mesolithic era. It was ruled by Republic of Genoa, Italy, Britain, France, occupied by British again, and it was even briefly independent but ultimately sold to the French.

If it were a car, it would be a lemon. Wonder if that's why this lemon cheesecake, aka fiadone, is their signature cake.

For the longest, Corsicans felt closer to Italy than France, and not only geographically. During the first half of the 19th century, the people of Corsica belonged still to the Italian cultural world.

Corsicans stared having a stronger attraction to France mid-century due to the knowledge of the French language, which thanks to the mandatory primary school started to penetrate among the local youth.

Napoleon's existence alone constituted an everlasting link between France and Corsica. He was born in the island's capital. I don't know about you, but history fascinates me. When you're this old and have lived in three countries, your memories are also of historical size, lol. Thus an occasional blast from the past. You probably remember it from the recent Cuban grilled salmon post.

I especially like ancient history. Being a GENEALOGY nerd, I love discovering and analyzing migrations of my ancestors and I learn a lot along the way.

I like it even more when there's food involved and I learn the origins of a dish. Wouldn't you like to be able to travel back in time and find out who came up with this popular family cake of Corsica? I certainly would. I'd just have to rebrand my blog then to something like Flashback Jas, ha!

Thanks to the Corsican with a sweet tooth who, with meager ingredients, whipped up this delicious cheesecake,  my family truly indulged in it and I know yours will too. Like the island itself, it is partially a product of French and Italian influences.

Baked in a fun shaped mold (like the flower one I found at Aldi's), it makes a perfect treat to bring to Mother's Day brunch. It is light, cheerful, and delectable. 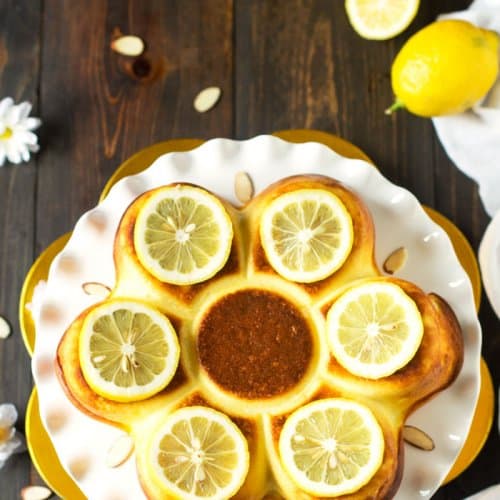 ~ Free Tip ~ Substitute sugar with Swerve or another zero calories sweetener that tastes, bakes, and measures like sugar.

Soup is always a good idea!