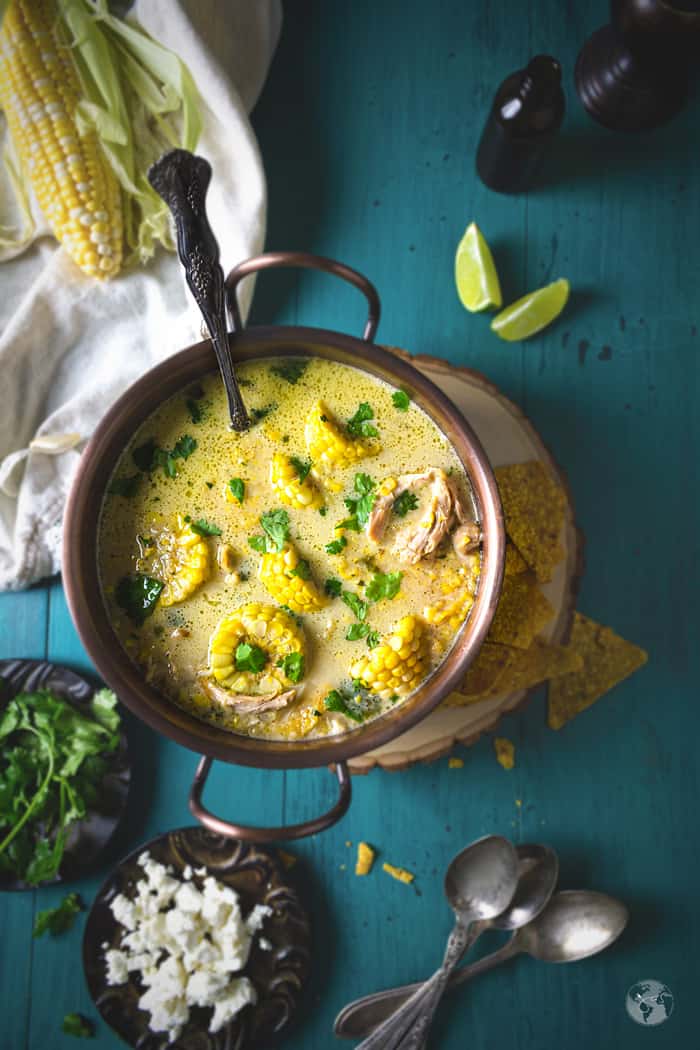 Peruvian chicken chupe is easy to make and cooks in about 30 minutes. It’s the perfect dish for rainy days, winter blues, and Christmas hangovers.

This chowder represents the delicious taste of Andean cuisine. It features a chicken base with three forms of corn: fresh corn, canned corn, and corn tortilla chips.

To balance the sweetness of the corn, serve this chowder with a drizzle or two of your favorite hot sauce and a sprinkle of feta cheese on top.

Balance the sweetness of this #chicken and #corn Peruvian #chowder with hot sauce and feta cheese. #glutenfree #soup #chupeClick to Tweet

I also served brown bread rolls (I think from the Cheesecake Factory – not an affiliate). They were the perfect vessel to scoop up the chowder and wipe the bowl clean, but any bread would do just that.

There’s nothing more comforting than a bowl of a hearty soup, chowder, stew or a bisque. Don’t you agree? 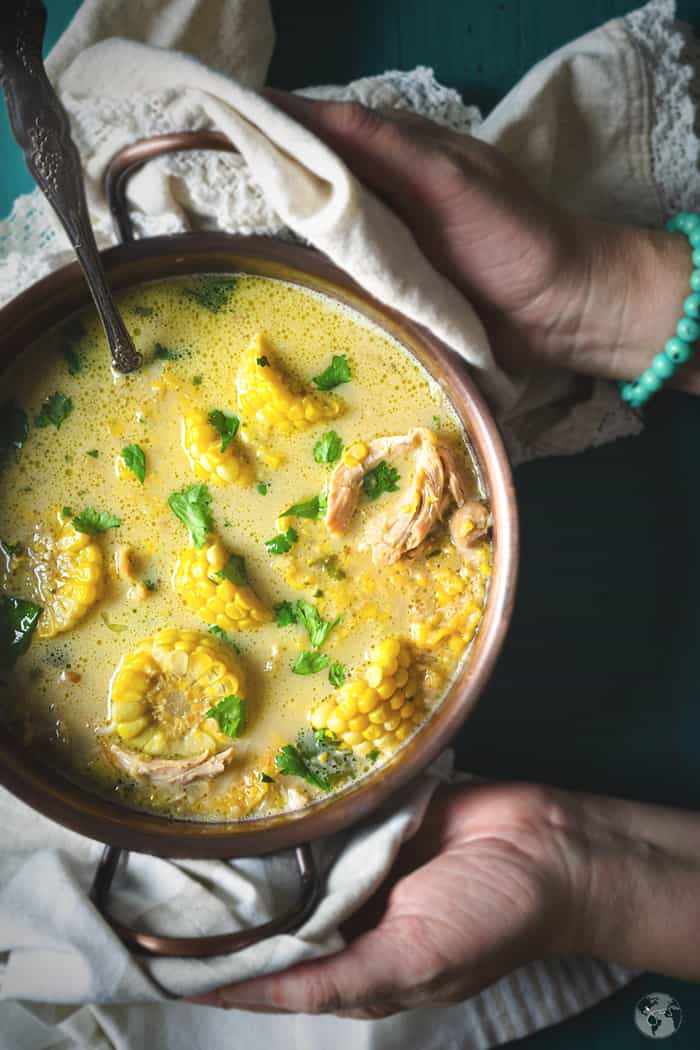 What is in Peruvian chicken corn chowder?

*Keep scrolling down to the recipe card for a list of FULL ingredient amounts and instructions or click the “Skip to Recipe” card at the top of the page! 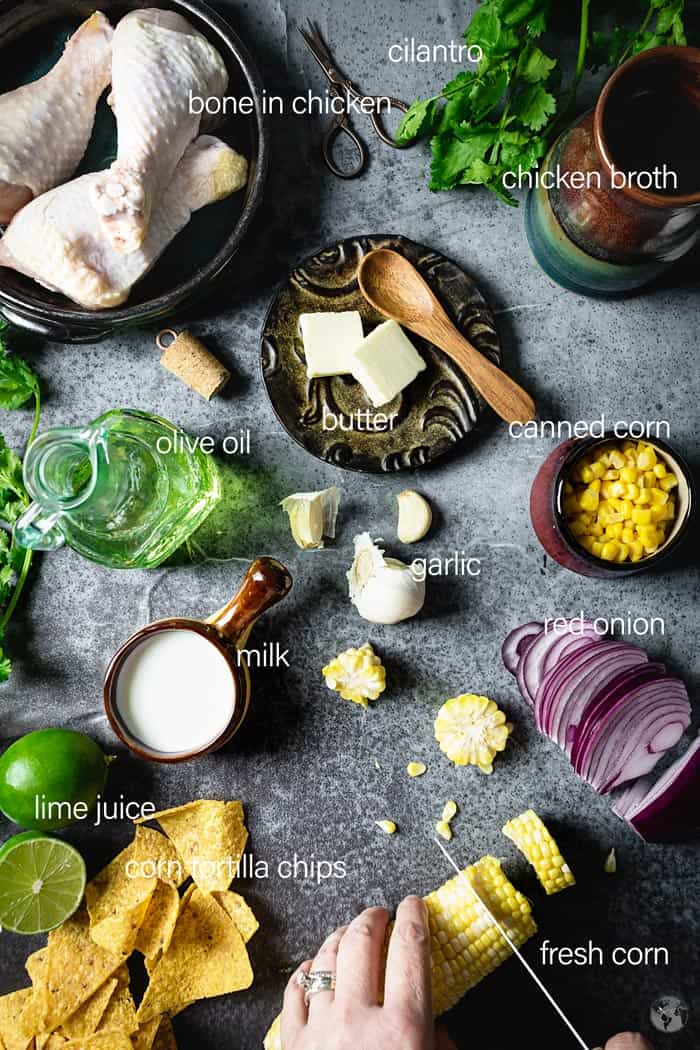 1. WHAT CAN I USE IN PLACE OF CILANTRO?

If you have the genes that make you recognize the soapy-flavored aldehydes in cilantro leaves, no worries, you can substitute cilantro (coriander) with fresh thyme or oregano. Parsley will work nicely as well.

2. IS CILANTRO AND CORIANDER THE SAME?

The plant’s fresh leaves and stems are called cilantro in the US while its dried seeds are called coriander. The rest of the world calls fresh plant coriander and its seeds coriander seeds. Now you know. 😉 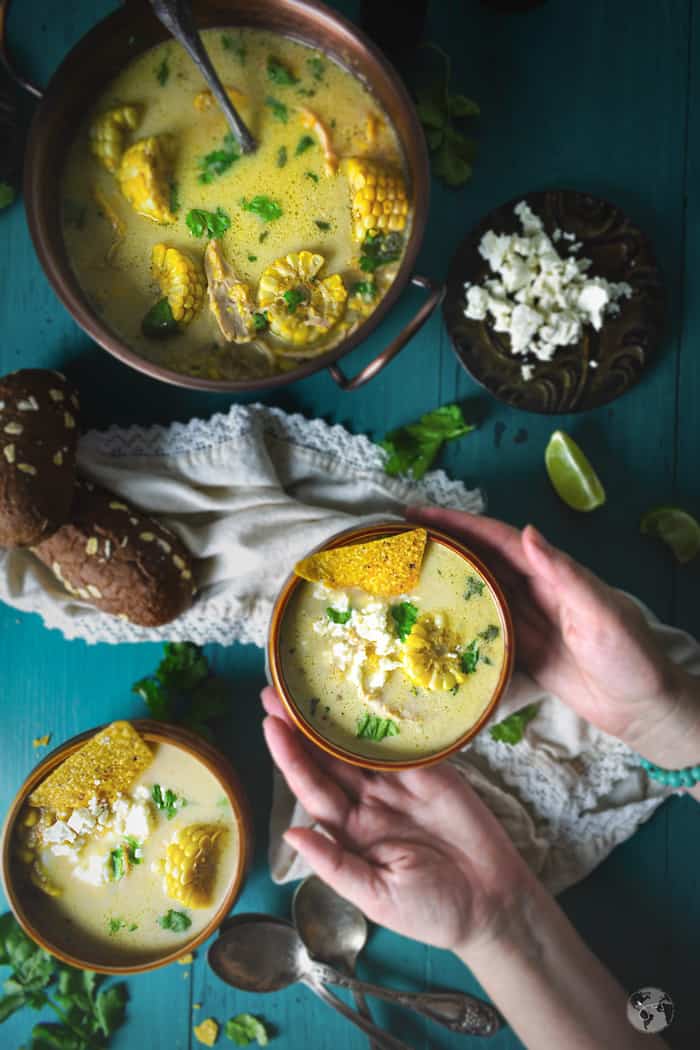 How to make this Peruvian soup?

* The full and printable recipe is available in the recipe box at the bottom of this post. Also, check out tips for the best results below. Disclosure: There are affiliate links in my posts. This doesn’t change the cost you pay for an item; it just means a tiny (and I mean TINY) commission comes to All that’s Jas to help offset the costs of running this blog.

If you PIN this recipe now, you will have it saved for later.

MAKING THIS RECIPE OR OTHERS? 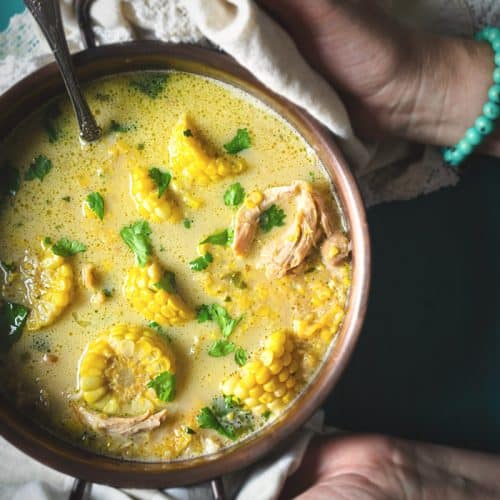 Become a subscriber for recipes updates, tips, and freebies.

This site uses Akismet to reduce spam. Learn how your comment data is processed.